The Importance of Tech Awareness On Modern Woman 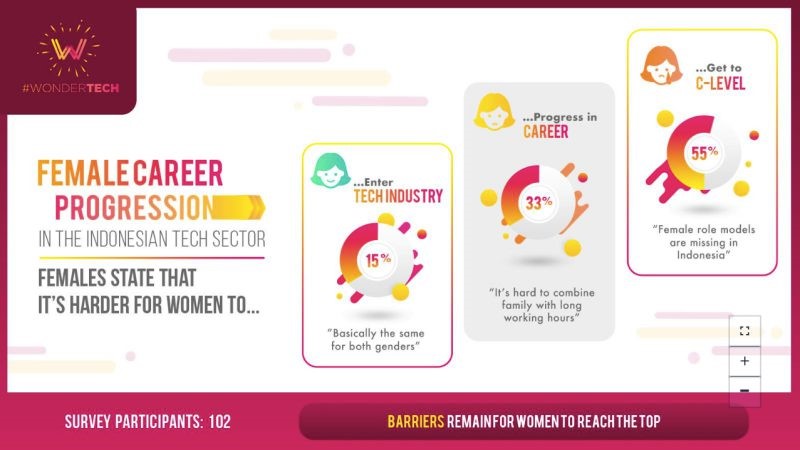 Entering the modern era and industrial revolution 4.0 where currently almost all industrial sectors are demanded to be able to innovate and transform into the digital field, female figures in the information technology industry have begun to become more common and could be seen across all sectors.

Based on the research conducted on women that takes part in the IT industry on July 2017, there are a handful of women who feel the struggle of working in this industry. The challenges are being found on the career development stage, not on the starting point of the carreer. Moreover, most of these technological women also agree that they do not have that many inspirational figures who could encourage them to explore the depth career paths in this popular industry.

In actual, both genders have the equal freedom to work in this industry. However, the biggest external challenge would be the industry’s culture which is dominated by men. On top of that, the fact that many people still yet to adapt the modern culture mindset is also a problem often being faced by an IT woman.

This challenge of stereotyping then becomes my motivation to be more optimal in delivering my work and responsibilities. Because in the end, I feel that I can simply answer this challenge by proving my exceeding expectation performance of those individuals.

In recent years, there have been many programs which have been carried out by both public and private sector to help female workers to find their path in the technology sector. These programs are intended to evoke interests and motivations inside these women to further explore the modern world with its rapid technology development.

Telkomtelstra also strongly supports this effort through a series of both internal and external programs with the aim of empowering women. This support is being channeled through its effort in organizing an internal forum called Brilliant Connected Women which is being conducted twice every quarter (3 months) for women to express themselves and to motivate each other, down to the structural level. This existing system ensures and enables management to see the gender diversification and equality even at the very top hierarchy of the company.

Other than this internal forum, Telkomtelstra also showed its support for Indonesian women through a conference called the Indonesia Women Forum, as well as cooperating with ipSCAPE to provide a Cloud Contact Centre for Women’s National Commission in 2018. With the presence of these channels, Indonesian women are expected to feel supported and confide themselves that they could enrich themselves with the abundant knowledge of technology. which is required to shape the personality of a tech savvy modern woman.

For the Future Generation of This Nation: Women as the ‘Agent of Change’

The external challenge in the macro scope which needs to be considered is the country’s readiness to adopt various technologies in its many industries. Several industrial sectors in Indonesia are now ready and have digitally transformed. For example, the banking and produce industries such as oil and gas have the capability to absorb many IT workers and implement the digital transformation into their business activities. Limitations in technology adoption can actually be found in the health and education industry.

Seeing this opportunity, women must be able to be actively involved in the era of digital transformation. In addition to a career journey that cannot be separated from technological developments, everyone must certainly be aware of the positive and negative effects of technology. This knowledge is not only beneficial for career women, but also to aid those women who lead a more domestic/housewife life. Women who hold the role as a mother must be able to help the next generations to wisely utilize technology in their own time. On the other hand, technology also opens doors for so many women to work and implement their creativity onto their own interests and talents.

I do hope that we get to see more outstanding women in the world of technology, such as Alamanda Shantika who developed the User Interface (UI) and the application programming of Go-jek. What makes this 30-year old an inspiration for so many women in IT would be the activity besides her career which is Binar Academy. This is a coding school located in various locations such as Serpong, Yogyakarta, and Batam. With a strong vision, I am certain that we will see more inspiring women such as Alamanda in the future. Not only for the Indonesian women, but for Indonesia.