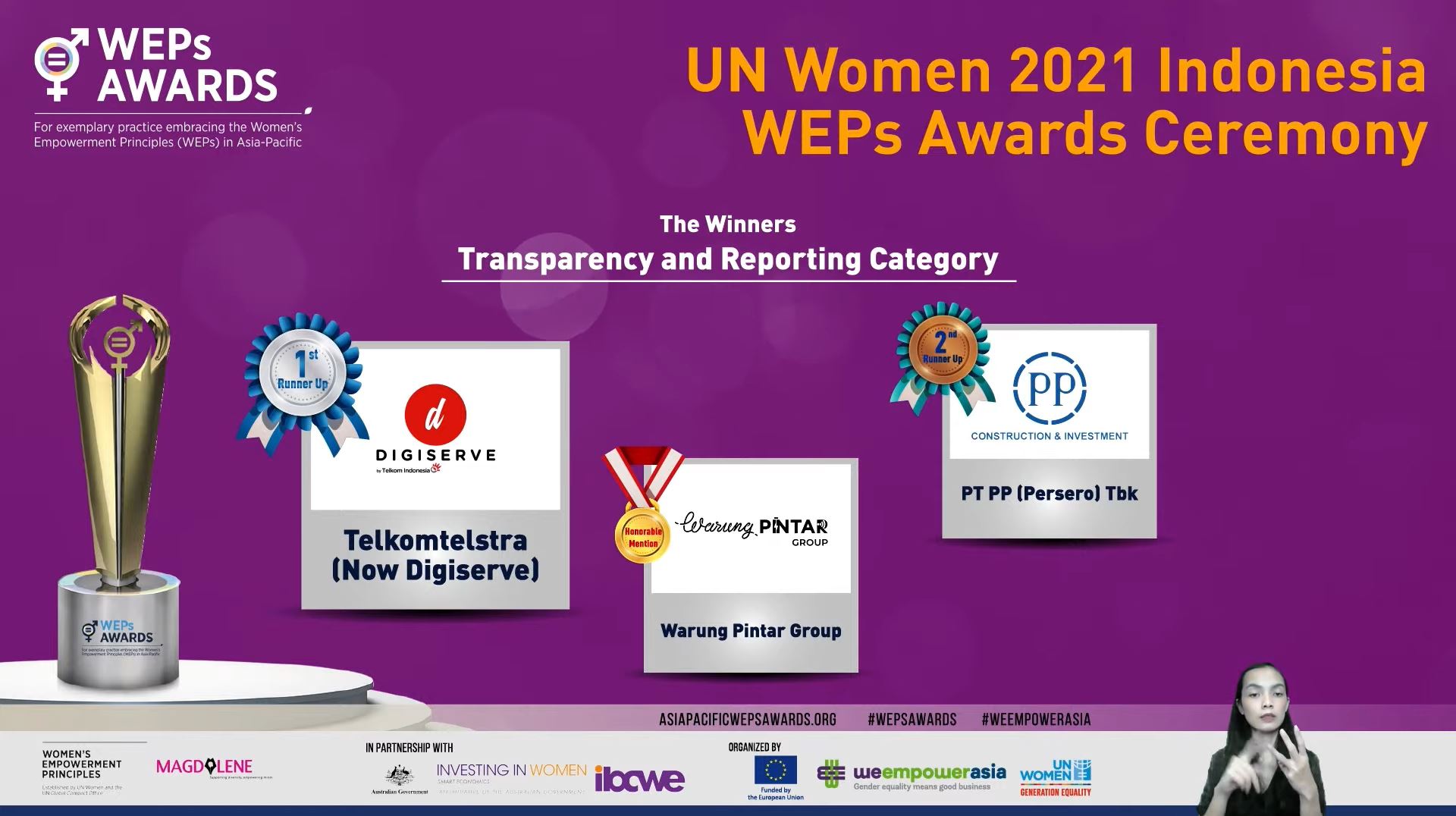 JAKARTA – Digiserve by Telkom Indonesia managed to become the second winner in the Women’s Empowerment Principles (WEPs) Awards held by UN Women Indonesia. The WEPs Awards Indonesia 2021, organized through the WeEmpowerAsia program funded by the European Union, provide appreciation to the private sector in Indonesia for its initiative to address gender inequality and support the active participation of women in supporting the national economy.

Digiserve won the award in the Transparency and Reporting category for its initiative that prioritizes gender equality and women’s economic empowerment in the workplace. The Transparency & Reporting category is an appreciation for the company’s commitment to transparency and gender data reporting that goes beyond minimum requirement and seeks to measure, analyze and report on the performance of their gender responsive business policies and practices across the business value chain.

This category is intended for companies and organizations that have an accountability framework and have set targets, and consistently report and take steps to improve their performance to achieve gender indicators (such as in recruitment and retention, women’s participation in management). This category also recognizes the efforts of companies that carry out audits and analysis of issues related to gender issues, such as the gender pay gap, or companies that are committed to increasing the number of gender indicators they report publicly each year.

Agus F. Abdillah, Digiserve Director said “We are proud to have an award from UN-Women as a gender-responsive company. As a company in the Information Technology sector, Digiserve supports the implementation of the women’s empowerment principles and the company is committed to empowering women workers.”

“In the category of Transparency and Reporting, Digiserve is committed to empowering women workers. One of them is by using GEARS as a gender equality diagnostic tool that helps organization analyze gender equality status, shows gender equality gaps in organization, and helps develop a strategy to address inequality,” he explained.

Agusfa also explained the efforts that his company had made to encourage women’s representation in company leaders. According to him, in addition to making policies that encourage women’s representation in the leadership ranks, companies should also look for solutions so that they can remain in leadership position with dual roles in their families, one of which is by implementing the Work from Home (WFH) policy that has been implemented since 2017.

“We have made several efforts to encourage women’s representation in company leadership. First, during the recruitment or promotion process we strive to balance male and female candidates. The more we increase the number of candidates in the promotion process, the higher the chances of the number of female candidates. Companies must also be able to adapt to policies that support women at the company leadership level, because there are female employees who have multiple roles and responsibilities in the family. Therefore, companies must also be able to find solutions to accommodate this,” he said.

228 applications from 138 companies were selected by a panel of 10 judges in six categories: Leadership, youth leadership, gender responsive marketplace, gender inclusive workplace, transparency and reporting, and community engagement and collaboration. Especially this year, UN Women also gave their appreciation to small and medium enterprises (SMEs) in Indonesia that promote gender equality and inclusive culture, with a special award in the form of Small and Medium Enterprises (SME) Champion.

The panel of judges consists of professionals in the business and development sectors with experience in women’s economic empowerment issues.

Winners from seven countries, including Indonesia, have the opportunity to be selected as winners at the Asia-Pacific level during the regional awards ceremony on 18 November 2021.

WEPs is UN Women and UN Global Compact initiatives that aim to empower women to participate fully in the economy in all sectors and outline seven steps for businesses to achieve in the workplace, marketplace and community. To date, more than 3,800 companies worldwide have signed WEPs, including 145 companies from Indonesia.

About Digiserve by Telkom Indonesia

PT Digital Application Solusi or Digiserve by Telkom Indonesia, is an Information Technology company engaged in ICT Managed Solutions. After being acquired by PT Telkom Indonesia (Persero) through TelkomMetra in 2021, Digiserve is increasingly supported in developing the best service with the belief to strengthen customer business in achieving better results. Digiserve will do this with its integrated Managed Solutions, leveraging its extensive network reach, world-class capabilities and local expertise.