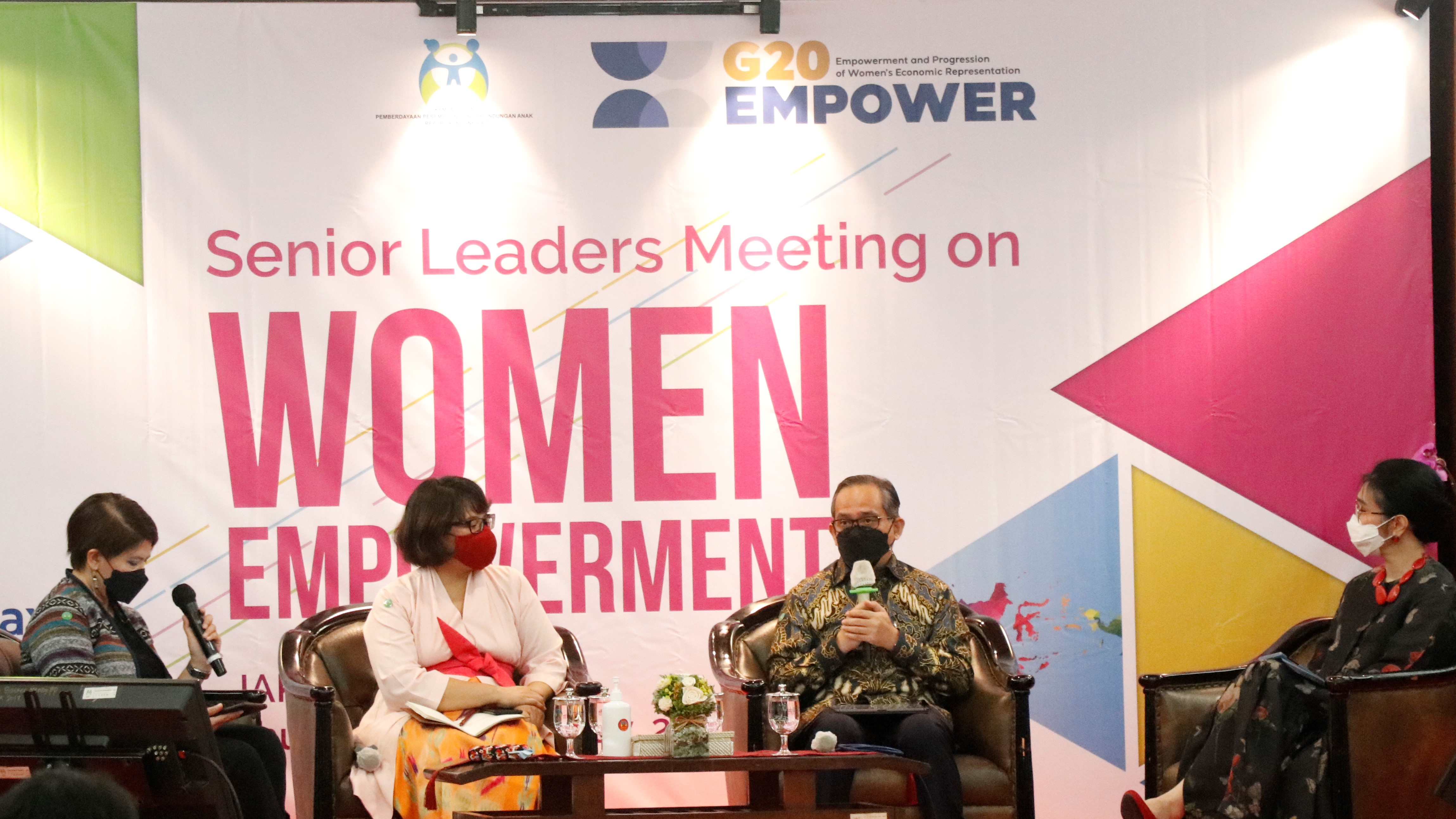 On 27th of June, myself and other delegates of G20 Empower Indonesia members from 27 companies of various industries, had the opportunity to meet with the Minister of Women’s Empowerment and Child Protection (PPPA), Ibu Bintang Puspayoga. During this event, I was honored to be one of the speakers during the discussion panel. The Minister, Ibu Bintang Puspayoga, appreciated companies in Indonesia that have committed and have good practices in providing capacity building, making policies, overcoming women’s employment issues, and facilitating the representation of women as leaders in companies. “The commitment of company leaders to provide an equal place for women is an important thing to strive for. Surely, we have to stand together for realizing this, not only across the domestic sectors but also internationally. Therefore, G20 Empower becomes a very strategic platform to unite international forces with an aim to advance women throughout the world, especially in the economy, leadership, and public sector”.

Also, according to a 2018 Women in a Workplace Study by McKinsey & Company , women tend to have more difficulties in getting promotions in the work place as compared to men. Men are most likely to be hired or promoted into manager-level jobs. On promotion rate by gender, on every 100 men promoted to a manager, only 79 women are promoted.

The term gender equality refers to equal conditions for men and women in the fulfilment of rights and responsibilities. Gender equality strengthens a country’s ability to develop, reduce poverty, and govern effectively.

As a company in the STEM industry, Telkomtelstra, a joint venture between Telkom Indonesia and Telstra Australia, is committed to supporting gender equality in the workplace. Telkomtelstra has been developing its gender equality initiative, diversity and inclusion, as part of its business strategy since the company was founded.

Telkomtelstra believes that the impacts of this initiative will greatly assist the company in terms of talent development, and business performance, and will definitely have a positive impact on the company’s reputation.

Companies must also be able to adapt to policies that support women in leadership positions, as female employees are often required to fulfil multiple roles, and have a responsibility towards their families. As a result, companies must be able to find solutions to accommodate these multiple roles.

The company’s various efforts are a part of the Pledge for Parity program launched in 2016, to support gender equality in the workplace. Five major targets were set at the time, including to ensure that there are (as many as possible) female candidates included in the selection process to fill all vacant senior positions.

The remaining targets are to increase the number of female employees recruited in areas which are still dominated by men, provide lactation rooms in all offices, provide “work flexibility” options, and provide male and female employees with newborn babies the opportunity to work from home for two weeks.

In addition, Telkomtelstra has applied a work from home (WFH) policy since 2017, before the outbreak of the COVID-19 pandemic. This policy is deemed important in supporting women’s equality and protecting employees, particularly young women who will give birth for the first time — a time during which they decide whether to leave their careers or not.

By the end of 2020, Telkomtelstra was able to achieve four of the five major targets set by the Pledge for Parity program. Work on the remaining target continues, with improvements taking place to increase female representation in certain areas, especially technical IT-related work. The results of efforts to implement gender equality are slowly starting to show. Overall, by the end of 2020, the total number of female employees at Telkomtelstra had increased to 35%.

Despite the positive trend, major challenges remain in increasing the number of female talent in certain areas, especially in the IT and product fields and at the leadership level. In technical and technological fields, the percentage of female employees has reached only 25% of the 30% target. Meanwhile, at the leadership/management level, female representation is still at 23% of the predetermined target of 30%.

The article was written by Ernest Hutagalung, CFO telkomtelstra